LONDON  – The world’s best dining destinations have been announced, according to the sixth annual  poll of its readers by luxury private jet title Elite Traveler, in association with Grey Goose. The top spot has been awarded to Spanish restaurant Azurmendi for the very first time, overtaking Grant Achatz’s Alinea which had retained first position for the last five years. Atxa’s Azurmendi utilizes the magical Basque countryside in which they reside for produce, tradition and inspiration.  Ranked as the second best restaurant in 2016, the award is a major step for this Basque based three Michelin starred restaurant.  On receiving the award, a delighted Atxa said: “This recognition means a lot, as many of the voters would be people who have visited our restaurant.” The US has been recognized as the best performing country in the world, with 24 restaurants making the list, with Alinea (2), Eleven Madison Park (3), Per Se (5), The Restaurant at Meadowood (8) and Le Bernardin (9) all making the top 10. The Fat Duck was the UK’s highest entry and the world’s top new entry, re-entering the awards at number 10.  Dinner by Heston Blumenthal (15), Restaurant Gordon Ramsay (22) and The Ledbury (36) are all featured on the list, with Nottingham based Sat Bains making its debut in 94th place. This year’s Lifetime Achievement Award was received by Joel Robuchon, whose restaurants Robuchon au Dome (6) and Joel Robuchon Las Vegas (96) featured on this year’s list.  The Rising Star award was won by San Francisco based female chef Dominique Crenn, with restaurant Atelier Crenn debuting on the list at number 78.   The Chef of the Year Award was won by Massimo Bottura, whose restaurant came in 7th place. On receiving this honor, he said: “It means the world to me. It means that my team and I have been able to communicate our mission and share our passions with our guests and the public at large.”     The top 10 restaurants in the Elite Traveler Top 100 Restaurants 2017 include: Lifetime Achievement Award: Joel Robuchon Chef of the Year: Rising Star of the Year: 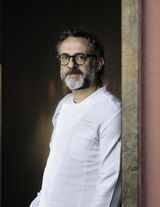 Where?
Osteria Francescana in Modena

Where?
Victor's Fine Dining by Christian Bau in Perl

Where?
Luce in San Francisco 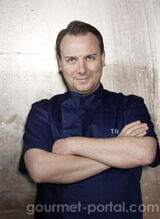 Where?
Tim Raue in Berlin