She will be honoured at The World’s 50 Best Restaurants Awards, in London on the 1st June.

LONDON. Hélène Darroze of Hélène Darroze in Paris, France and of Hélène Darroze at the Connaught in London, UK has been named the 2015 Veuve Clicquot World’s Best Female Chef. She will be honoured at The World’s 50 Best Restaurants Awards, sponsored by S.Pellegrino & Acqua Panna, in London on the 1st June.
After three years under his tutelage both in business and in the kitchen, she returned home to the family restaurant, Chez Darroze, in Villeneuve-de-Marsan in the Landes region. There, in 1995, Darroze’s father gave her the keys to the kitchen, where she spent the next four years refining her culinary style and honing her skills. At the age of 32, Darroze closed the family restaurant and set her sights on Paris, opening her eponymous restaurant on the Left Bank to critical acclaim and widespread commendation. Darroze’s talent and heartfelt contemporary French cuisine caught the attention of the Connaught, leading to the opening of Hélène Darroze at the Connaught in 2008. Seven years on, Darroze remains head chef at Hélène Darroze at the Connaught and her namesake restaurant in Paris. She travels regularly between Paris and London with her two children, Charlotte and Quiterie, overseeing all aspects of her businesses. 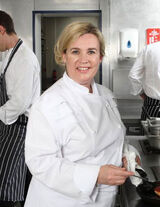 Where?
Hélène Darroze in Paris